The Art of moving a tunnel – pumping in a tight spot

When the steel boxes that form the tunnel of the Stockholm City Line were transported from Estonia to Sweden, Grindex pumps were called upon to do some serious pumping. They were fitted in a barge, which was sunk and raised in order to lift the 107m by 20m by 10m boxes, several meters above sea level, so that they could be taken through the locks at Södertälje and onto Stockholm.

From Estonia to Stockholm

The Stockholm City Line (Citybanan) is a new six kilometre rail line linking the south of the city with the north. Part of this enormous undertaking includes a tunnel/bridge (an underwater tunnel built on pillars) crossing lake Mälaren in the centre of the city. The tunnel is made up of three steel boxes that are lined with concrete and joined together underwater. The boxes, which measure around 107m (l) by 20m (w) by 10m (h) and weigh 800 tonnes each, were to be constructed in Estonia and towed to Sweden once complete. However, due to the size of the lock that they had to pass through in Södertälje, south of Stockholm, the boxes had to be raised a few metres above sea level in order to be towed through it.

Faced with this major obstacle it was decided that the best way to get them through the lock would be to put the boxes on a barge. However, in order to do this the right sized barge had to be found. “One of our Danish suppliers found an old Russian barge in the harbour at Copenhagen that was ideal for the job,” says Lars Ingemann, General Manager of Elmodan Elektro, Grindex’s Danish Agent and one of the contractors for the Citybanan project. The 96m long barge was towed to a dry dock in Tallinn and fitted with 8 Matador pumps and 4 Major pumps. It was then sealed and made watertight.

When the barge was ready, the dry dock was flooded and four external Grindex pumps (two Matadors and two Minettes) filled the barge with water. The first box was towed into the dock and the pumps on board the barge then emptied the water until it reached buoyancy and lifted the box a few metres above sea level. Both units were then towed to Södertälje, where they were eased through the locks with a few centimetres to spare on either side, before finishing the journey to Stockholm.

Put to the test

“This all went relatively smooth,” continues Ingemann. “But it was when we were going to decouple the units in open water that our calculations were put to the test. The barge was sunk, the box was towed away, and the on board

pumps began removing water to lift the barge up again. However, we found that we had slightly underestimated the amount of resistance caused by the barge lying in sediment at the bottom of the lake. And, although we had anticipated that this may be the case, which is why we had divided the barge into eight separate chambers, when it came up to the surface it was quicker than we expected.”Once up on the surface the barge was towed back to Estonia, to await completion of the next box.

“We were put in a tight spot and together with the building contractors, Pihl we came up with a creative solution and carried it out effectively. Something that I think we should all be proud of. In total we pumped 7,000m3 litres of water and got the job done in 18 hours. And, most importantly, the box arrived on time and unscathed” he concludes.

Since the first box was transported through the lock, two more boxes have been successfully transported to Stockholm in the same way. And, not surprisingly, Grindex pumps can be found hard at work at the Citybana construction site and they will be used when the boxes are sunk and put into place in the final stages of the tunnel project. 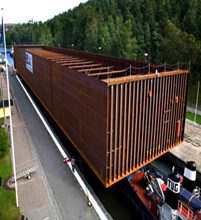