The rescue of a youth soccer team from a cave in Chiang Rai, northern Thailand hit the headlines around the world earlier this year as engineers and emergency services combined to pull off a remarkable mission in immensely difficult circumstances.

A group of 12 boys aged 11 to 16 and their 25-year-old coach from the Wild Boars soccer team had made what was supposed to be a quick visit to the caves after practice on July 23, but heavy rain led to rising water levels. They quickly became trapped, prompting one of the most incredible rescue operations seen in modern times.

Central to the rescue were the pumps used to empty the caves of water, making it easier for rescue divers to assist the boys and their coach and bring them to safety, but the process was a long and dangerous one.

It also turned out to be a lot more complicated than first imagined.

It was established that the boys were in the cave a day after they went missing and on the Wednesday, 48 hours after they entered the caves, Pradoemsit Srichumphon of Nopporn Express LP, who are distributors of Grindex pumps in the region, offered the assistance of his firm.

“On hearing the news that the kids were suspected trapped we reached out and offered our services to the government in any way we could,” explains Pradoemsit, who is better known to his friends and business associates as Joe.

Initially, efforts were made to clear the caves using engine-driven pumps from outside the caves, but this proved ineffective.

The pumps Joe offered were submersible dewatering pumps, and it quickly became apparent to those in charge of the rescue operation that specialist knowledge and equipment would be necessary of the boys were to be saved.

“Some days later, they asked us to come to site and assist with our expertise,” Joe recalls.

“We mobilized that day, bringing the entire stock of pump units we had - around 42 units to the site. We could only use eight units because the electricity in the cave wasn’t capable of running any more machines.”

Joe, his team and the rescue coordinators assessed the situation and decided that more power would be needed, as well as pumps placed much further into the caves – but the clock was ticking. 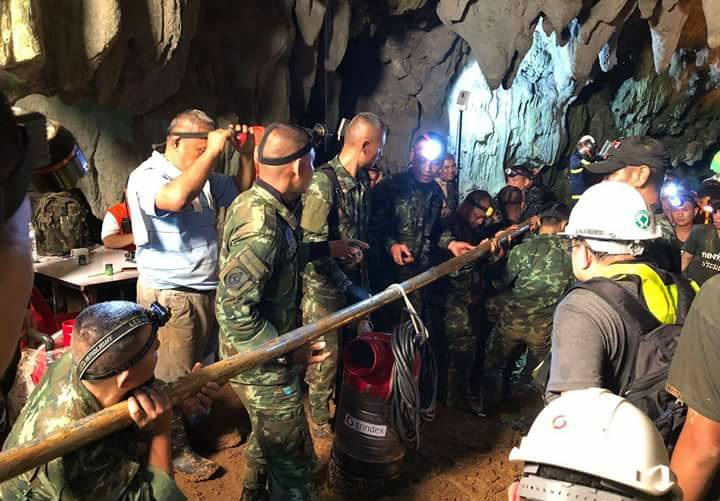 Nopporn worked together with a company called Friendtech and Thai government energy generator EGAT to begin the initial installation of Grindex pumps, putting them into operation to begin dewatering from inside the cave entrance.

“We deployed high-flow, low-head pumps into the cave, and they were moved deeper into the cave as the water level dropped. In all there were 13 people and eight pumps that involved with this situation,” says Joe.

“The issues of limited power supply, difficulty of access and the relative remoteness of the site made the operation very difficult,”

Dewatering the cave to enable to rescue

At the height of the operation, Grindex equipment was pumping out almost six hundred cubic meters of water per hour.

“We were surprised by the sheer volume of water that kept running in to the system,” Joe explains.

Eventually, water levels were reduced to the point where rescuers could move deeper into the caves and begin the arduous and dangerous process of bringing the boys and their coach out one by one.

The rescue effort in the caves of northern Thailand produced many humble heroes, but unfortunately one diver assisting with the operation lost his life in the operation – an illustration of how treacherous the conditions were.

For Joe, the outcome was a welcome one, and he lauded the rescue organizers and his colleagues, who worked around the clock to contribute to the effort to save the boys.
“We are proud to be a part of this story and to have helped save 13 lives,” he says.

It took 13 days, working 24 hours a day, seven days a week until the rescue was complete, and the result will stand as a testament to the combination of technology, team spirit and dedication of all involved. 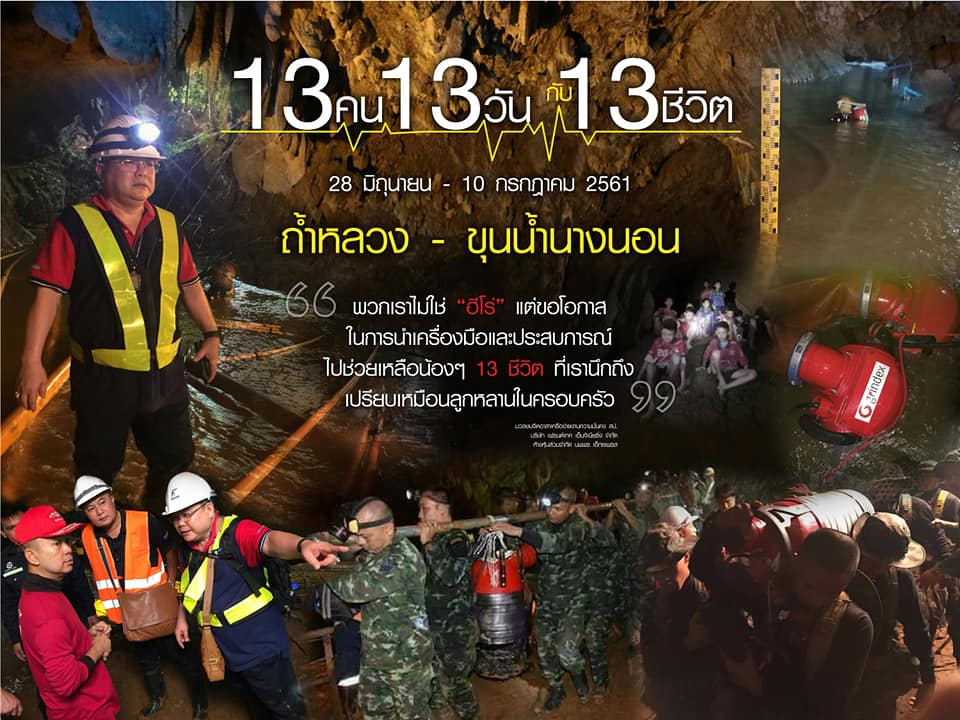