When the time arrived to sink the 20,000 metric ton segments of the new underwater tunnel in central Stockholm, Grindex pumps were chosen to handle this extremely sensitive job. They provided the ideal amount of control to lower these sections smoothly into place.

A unique solution for the busy commuter traffic 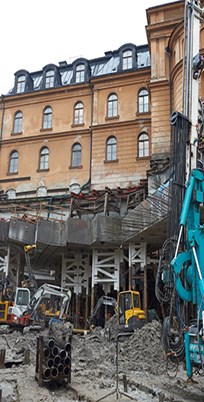 80 percent of all Swedish rail traffic passes through Stockholm central station. To cope with the ever-increasing number of trains, a new line is under construction. The new 6 km (3.7 mile) Stockholm City line will handle all commuter trains to the Swedish capital from 2017. One major construction obstacle is that Stockholm is built on a number of islands, hence its nickname the Venice of the north. Every train entering the station from the south has to cross several hundred metres of water at the tip of Lake Mälaren. Although the station is located very close to the lakeside, the city planners did not want yet another bridge to be built across the lake. Therefore, the decision was taken to build a hybrid tunnel – one that would be placed on pillars, traversing the lake under water – as opposed to a standard tunnel under the lakebed.

The Söderström (southern current) tunnel measures 400 metres in total and has an incline of about ten metres from north to south. The main stretch of the tunnel, which spans the stretch of water, is made of three 100 metre long concrete sections that were constructed in Estonia (link to other case here) and towed to the site. Each section weighs 20,000 metric tonnes, is 20 metres wide and 9 metres high. In April 2013, the first of the three floating sections was lowered onto the supporting pillars. The other two tunnel sections were lowered into place during the summer. A key role in this process was the filling and emptying of ballast water in a controlled and smooth way. Grindex pumps were chosen to handle this critical operation.

According to Robin Grape of Grindex Pumps, “Two Major pumps and three Minex pumps were used in the sections. Each section had three interconnected ballast tanks along the length of the base and water could be pumped between them to help stop the section from rolling or tilting.”

Sinking the tunnel, slowly and securely 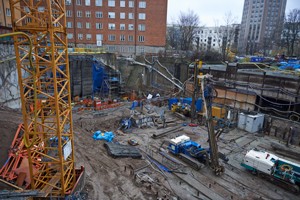 When the time came to sink a section, it was towed into place and attached to a series of floating cranes. The Major Grindex pumps then began to fill the sections with water. The Minex pumps were used to manage the ballast. As the water was filled and the sections began to sink, the pumps were controlled from a floating pontoon.

“It’s good to know that Grindex pumps were used throughout this amazing project. From the towing operation before the sections arrived on site, to draining the land-based tunnel construction site, to lowering and manoeuvring the sections into place. We even have a Magnum pump in the tunnel should a large amount of water need removing in an emergency. It just goes to show, when you really need to pump, you can rely on Grindex,” concludes Grape. 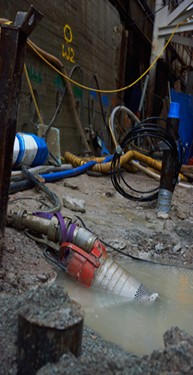