Expanding a port in the city of Gävle

Pumping hard wearing media over a long distance?
Sounds like a job for a Hard Iron™ Grindex pump

When a new method of port construction was being carried out in Sweden, which involved pumping hard wearing material over one kilometer, there was only one pump for the job: the Grindex Hard Iron™ Bravo 700.

As ships get larger and loads increase, ports are finding it harder to cater for these large ships. Not surprisingly, there is a growth in construction at small and mid sized ports. However, many port authorities are faced with a conundrum: how to expand within budget in the most environmentally friendly way possible.

A European team led by the Swedish Geotechnical Institute has recently developed a new technique, which uses recycled material in the construction of harbor structures. This involves mixing dredged material from the port with ash residue from energy production plants, among other things.

The port in the city of Gävle, which is located on the Baltic Sea in eastern Sweden, was recently expanded to be able to handle larger and more shipping vessels. It was the first port in Sweden to utilize the new environmentally friendly construction method.  In total 700,000 tons of dredged material were mixed with concrete, blast furnace slag and 30,000 tons of peat ash from a district heating plant located 100 km away. “According to Jonas Rahm, Gävle port Technical Manager, “Expanding the port with this method saved somewhere in the region of 50 million Euros, compared with traditional constructions methods. And it’s not just in construction that savings were made, the energy company that provided the peat ash saved around 1 million Euros in land fill costs.” 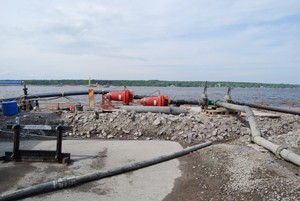 Two Grindex Bravo 700 Hard Iron™ pumps were charged with the task of pumping the extremely tough media once it had been mixed. The Bravo 700 pumps were connected in series and worked 24/7 for about 80 days pumping the mixture 1200 meters to the construction site. Commenting on the Grindex’s role in the project, Peab Construction Project Manager, Per Olov Jansson, said “We explained what we needed to do and Grindex took care of the rest, doing the analysis and dimensioning to ensure the pumping process would be a success. I’m happy to say the Grindex pumps were tough enough and had the capacity to handle the job. They pumped the media around the clock for almost three months, and made sure there were no unnecessary hold-ups in construction.” 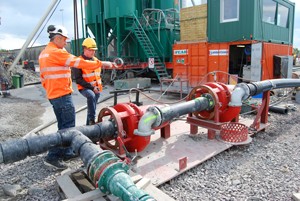 The Grindex Bravo 700 pumps that were in use can handle up to 120 l/s and can pump abrasive media up to heads of 35 metres. They are extremely wear resistant thanks to the unique Hard-iron™ construction and a low shaft speed.